The ultimate goal of this series of experiments is to test alternate sugar and oil sources for use in the cheese ripening process. To do this, this experiment fist aims to as closely as is reasonable replicate the chemical composition of milk so that the effect of replacing and/or removing of individual ingredients can be observed.

Production of cheese requires fats, sugars and salts as well as the casein protein. Our molecular biology team is currently developing a yeast-based casein production platform, but to achieve a product that is completely vegan the sugars and fats must come from non-animal sources as well. The goal of this series of experiments is to test the use of alternate sugars for the cheese ripening process.

The casein source available is micellar casein powder, which is believed to have been produced by an acid process similar to that described here: http://nzic.org.nz/ChemProcesses/dairy/3E.pdf . This process separates casein from whey in skim milk. Observing the nutrition information on the micellar casein some small molecules, such as lactose, are largely removed by this process. However, it is unclear what salts are removed by this process or if the removed salts will have a significant effect on the cheese making process. 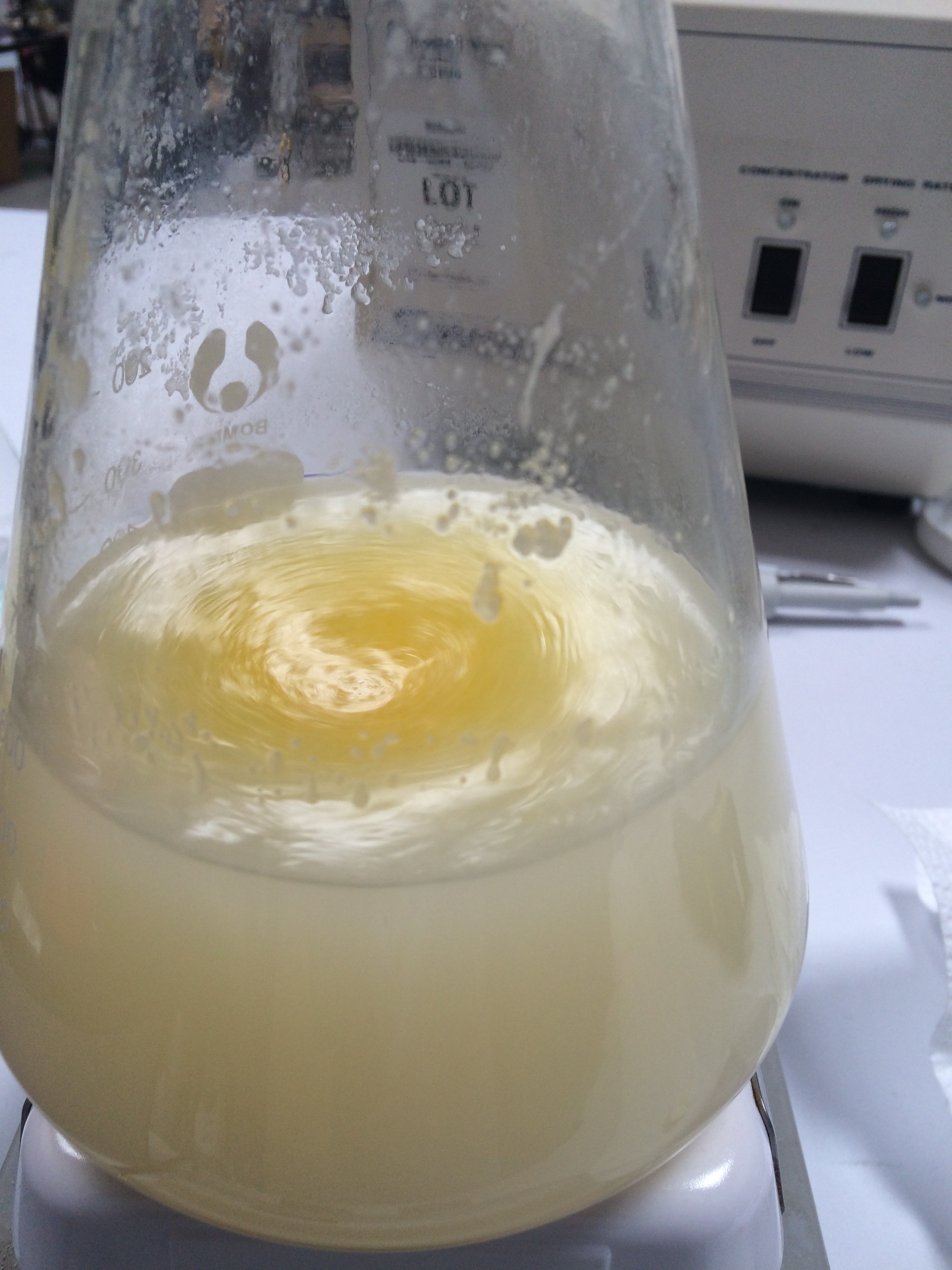 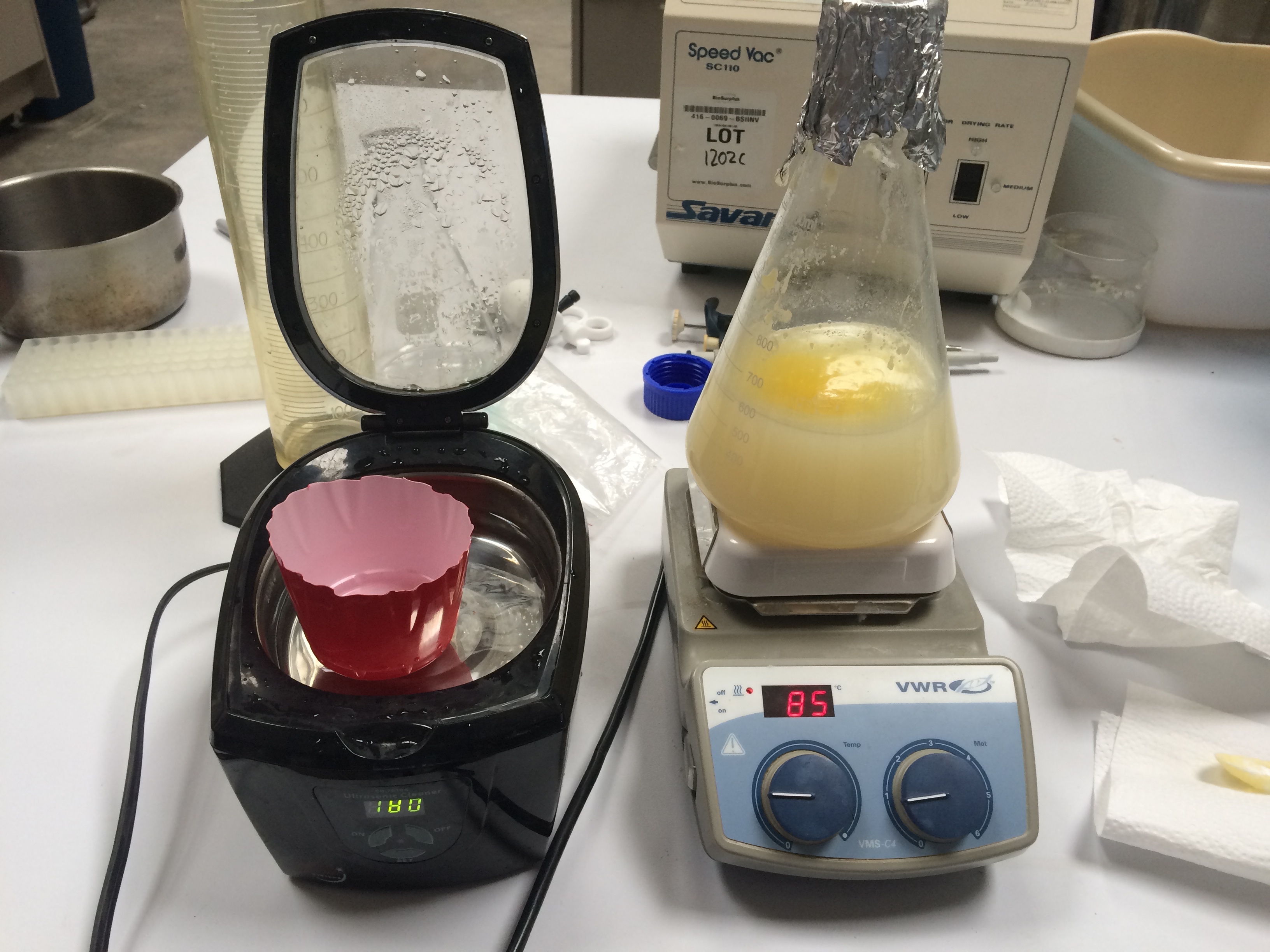 How the sonicator was set up plus the settings on the heated stir plate. 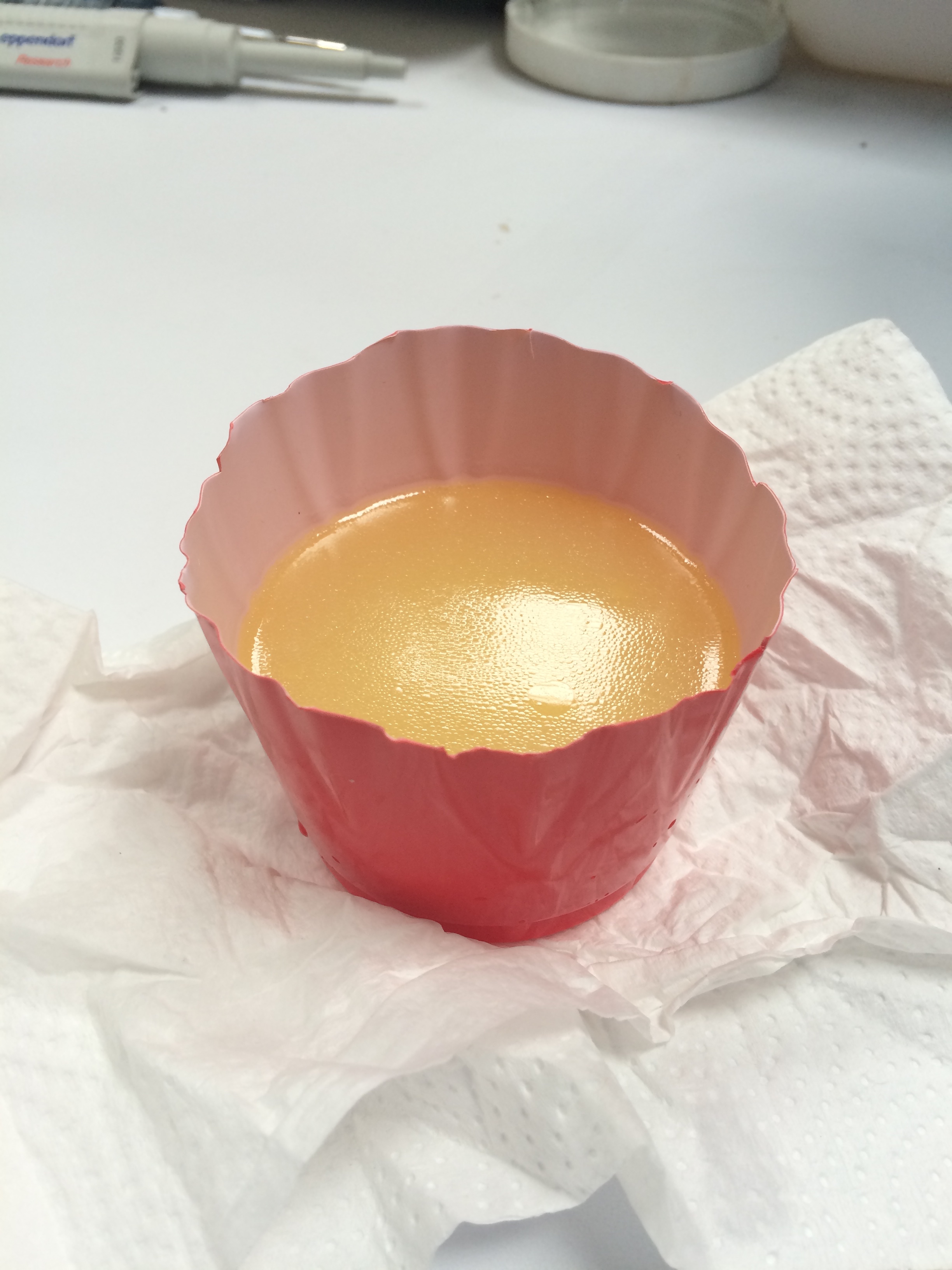 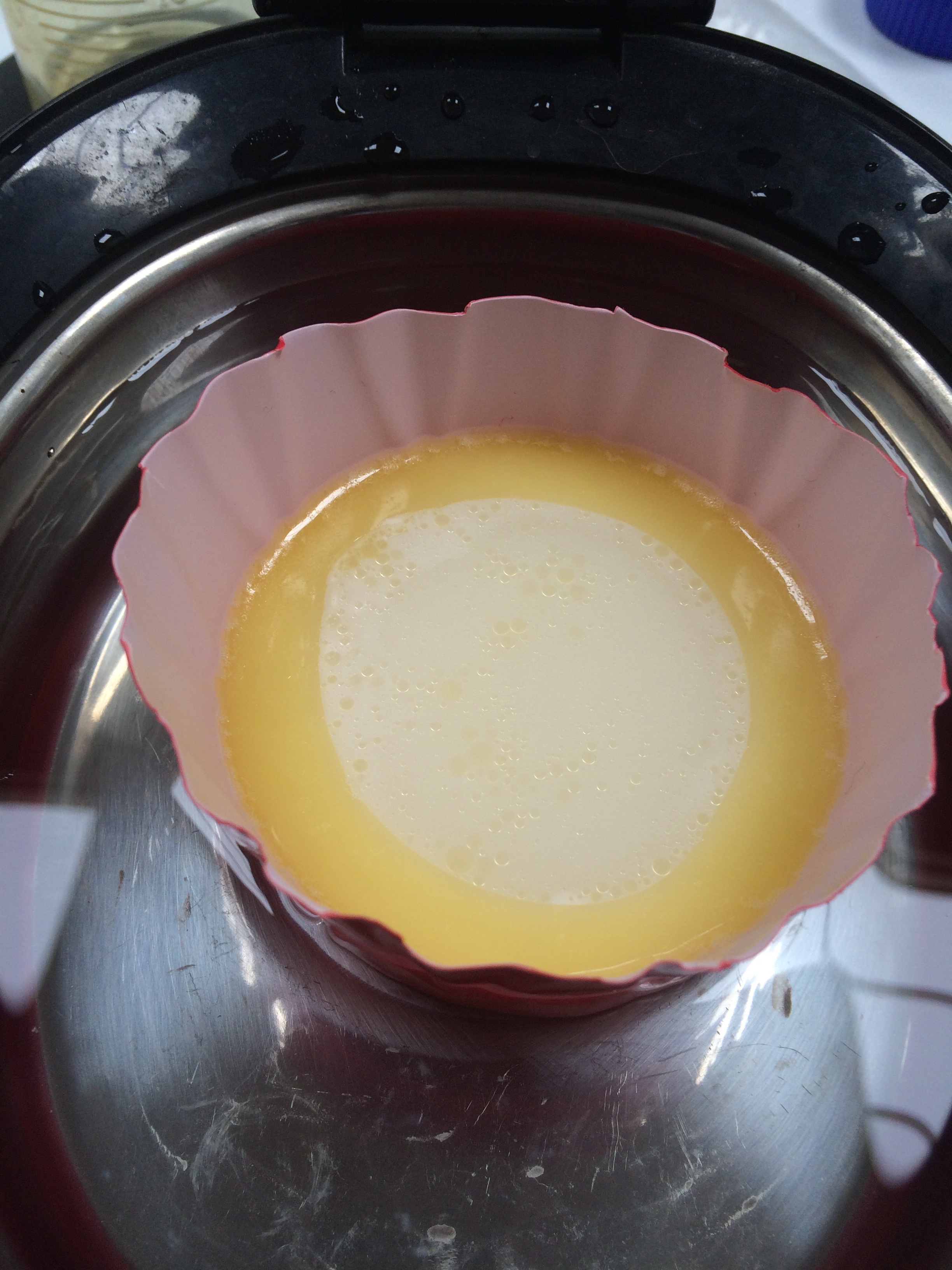 Re-assembled milk, after about 15 minutes of sonication 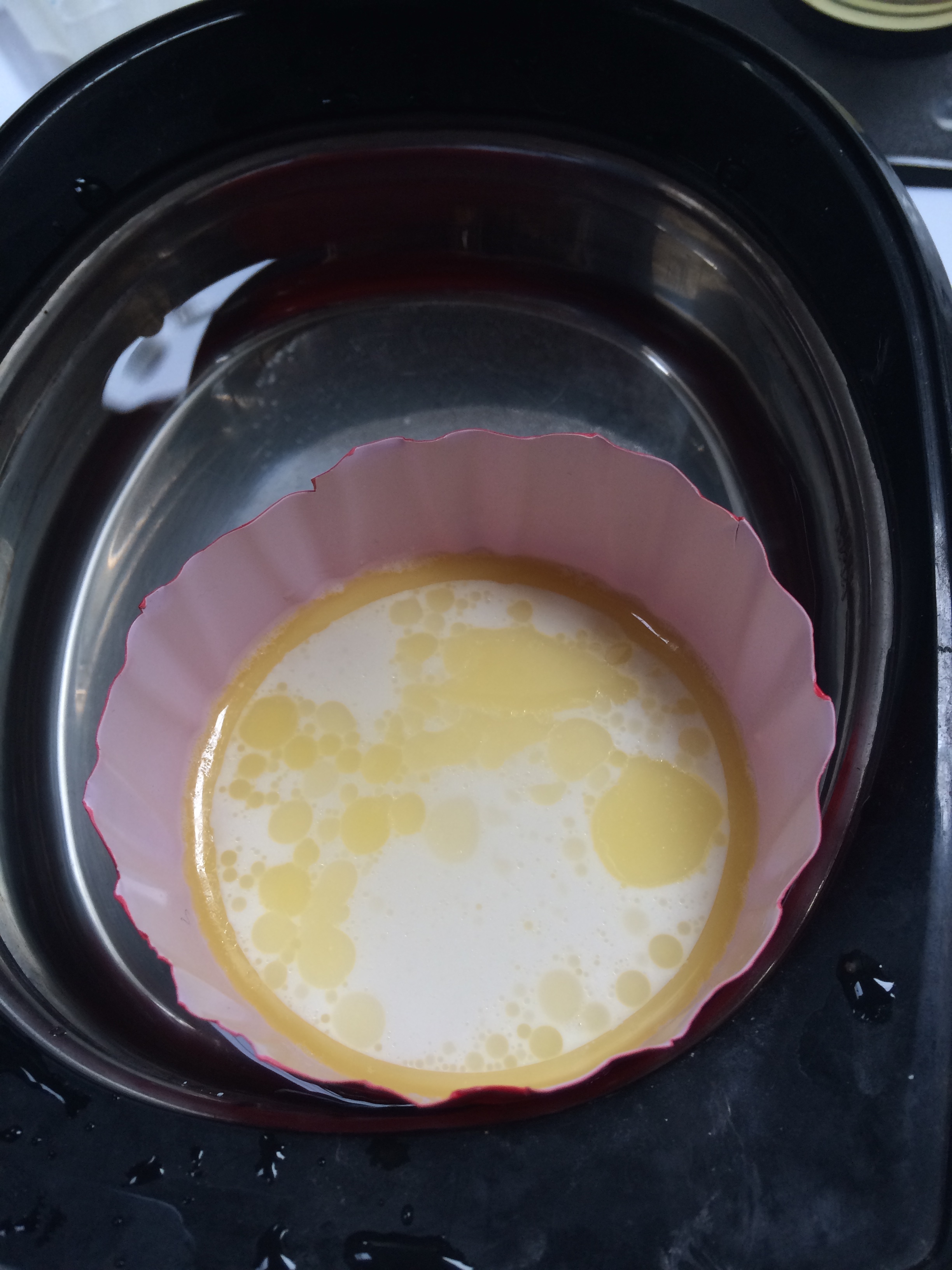 Re-assembled milk, after 32 minutes of sonication 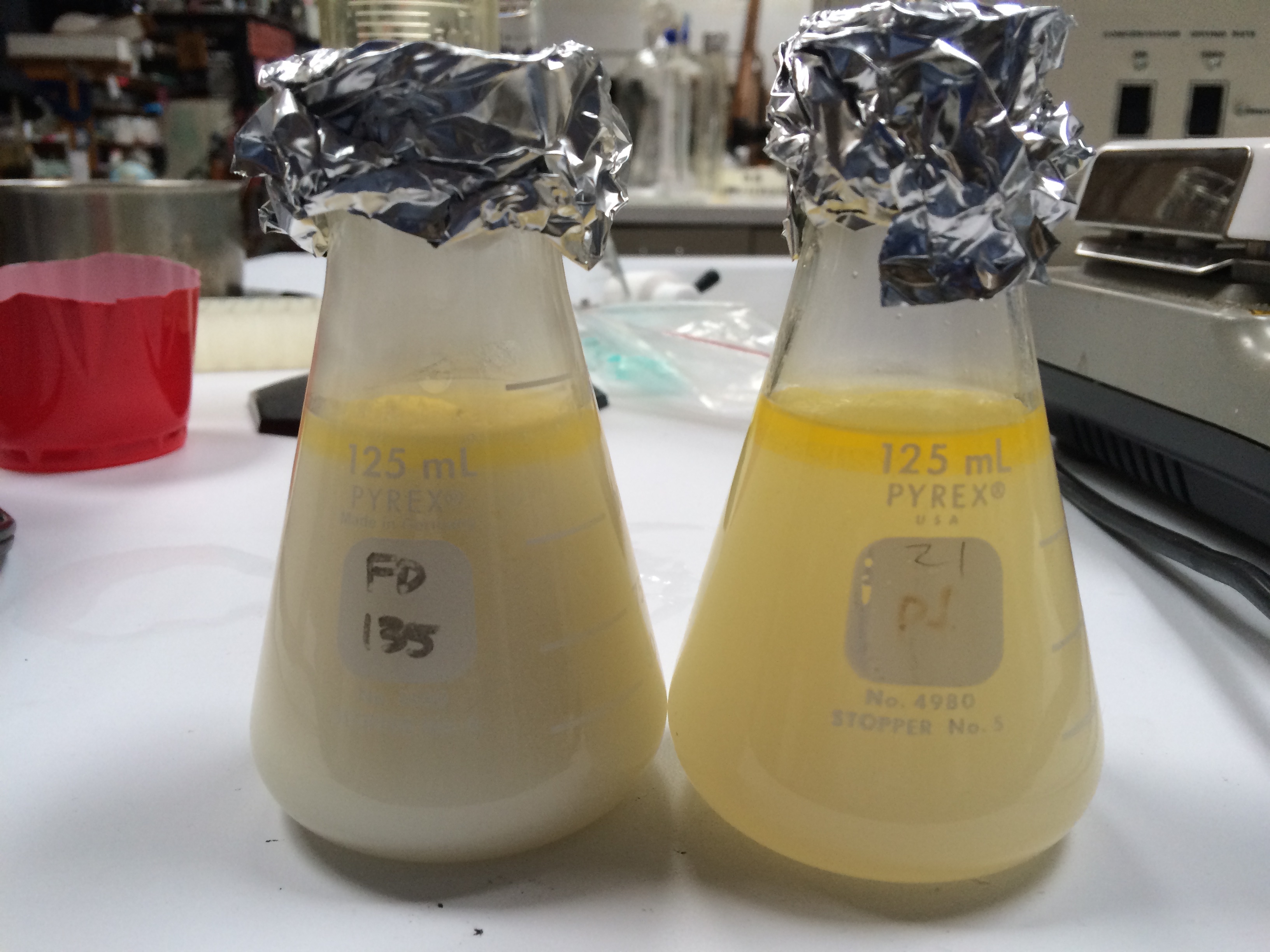 Comparison of re-assembled milk before (right) and after (left) sonication. 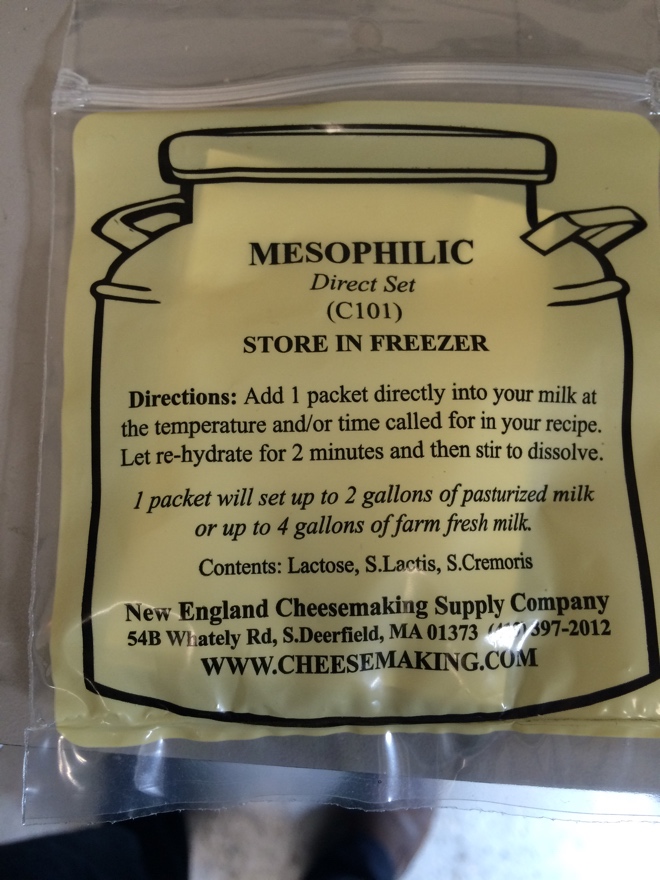 The mesophilic cheese culture that was used. 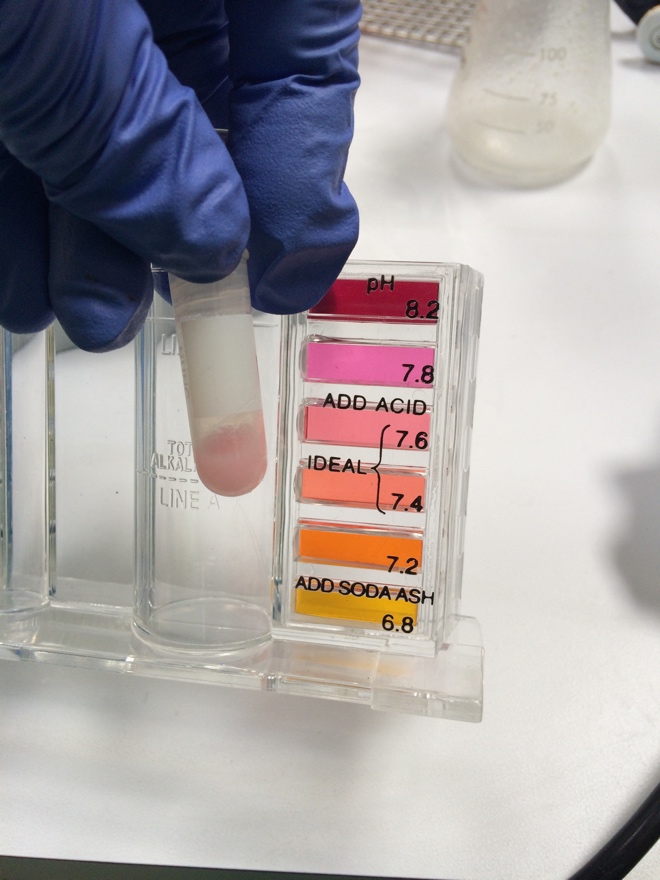 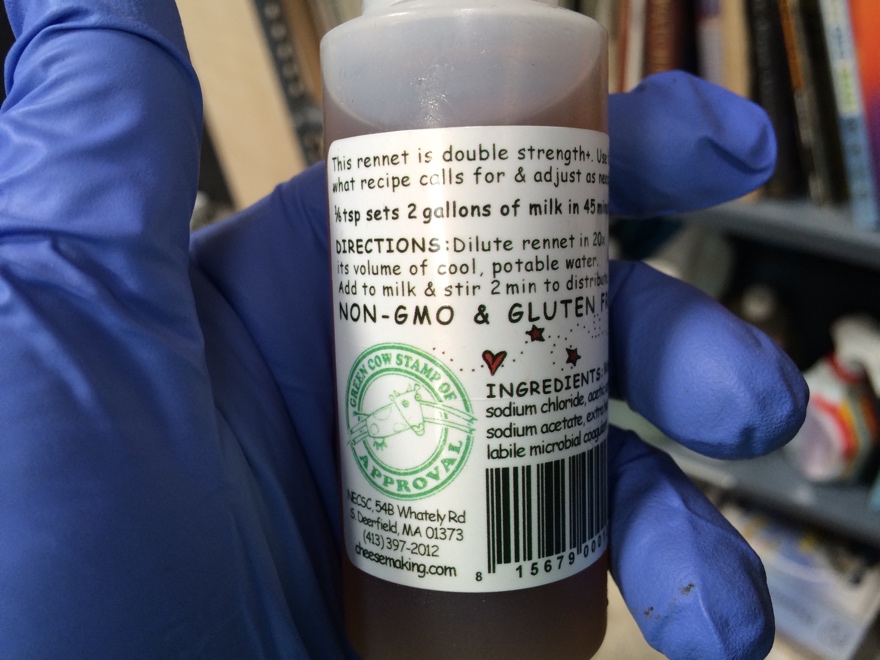 The vegetable rennet that was used. 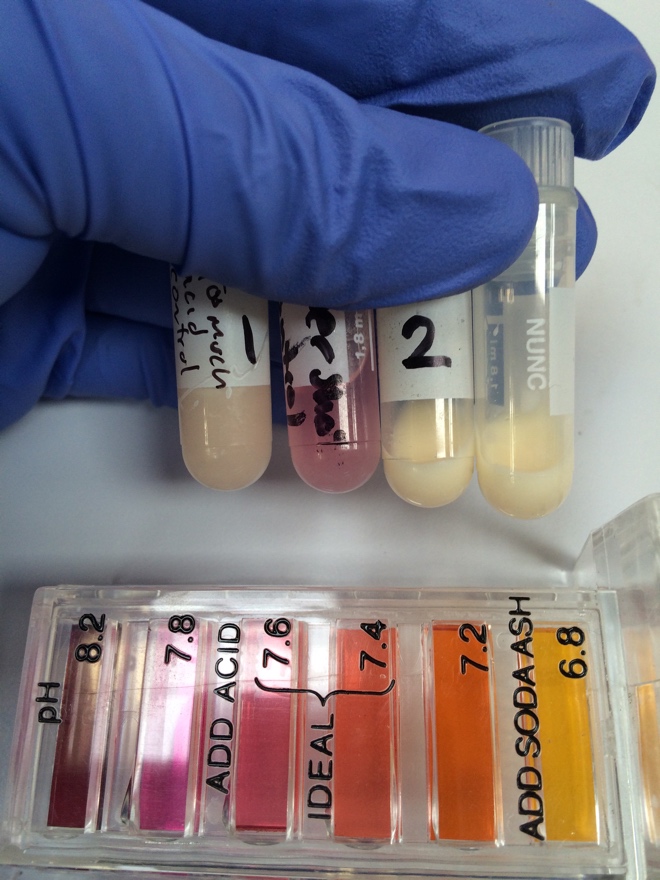 Vial # 2 contains the real milk before the addition of culture, the unlabeled vial contains the real milk 1/2hr after addition of the culture. The vial on the far left is re-milk with acid added so that it would intentionally overshoot the range of the pH scale, the pink vial contains re-milk with base added to make the solution overshoot the basic end of the scale. Note that the re-milk starts out with a yellow/orange color, making direct comparison of the pH'd milk and re-milk difficult. 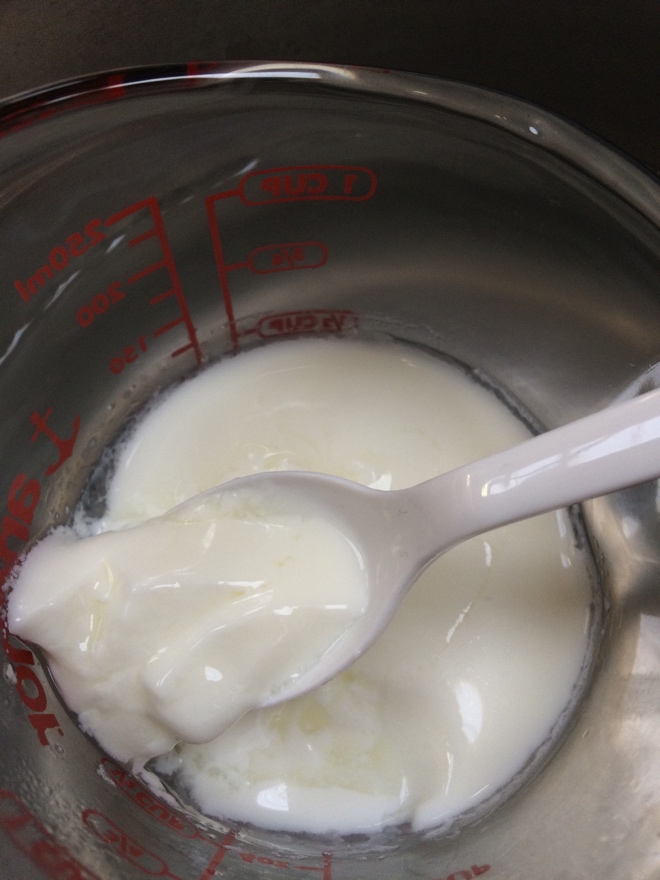 The consistency of the curds that were successfully formed using the vegetable rennet with real milk. 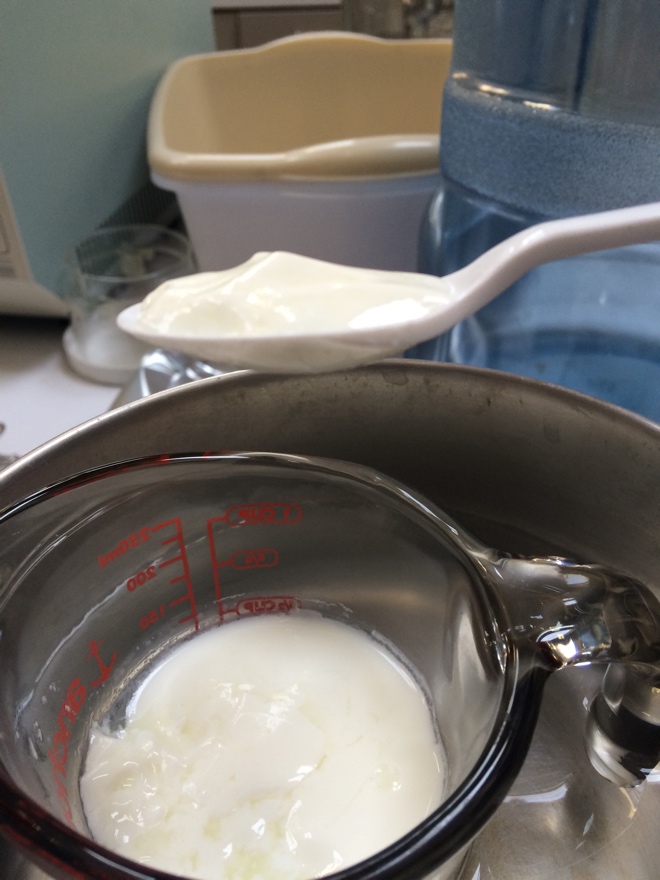 The real milk curd from another angle 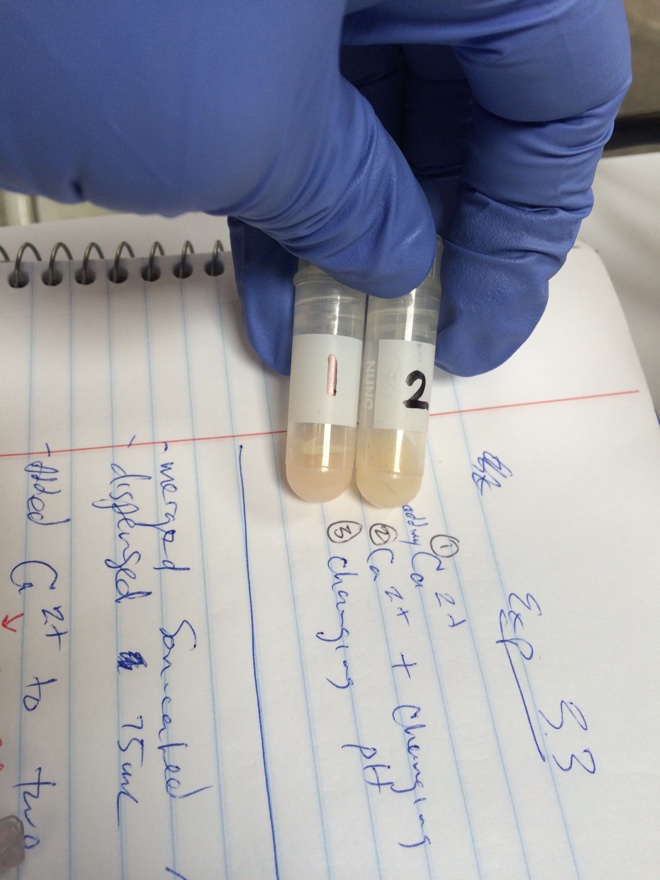 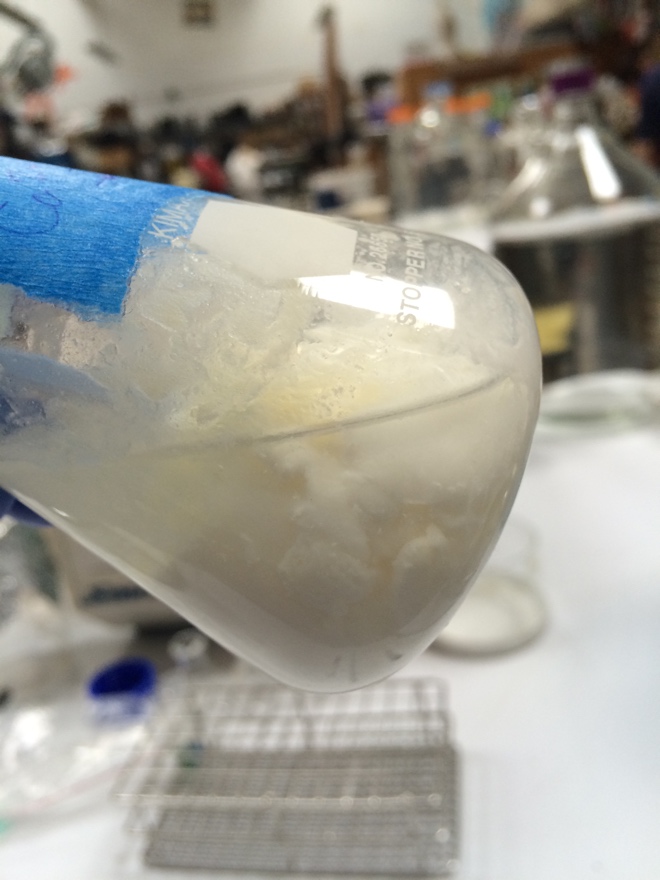 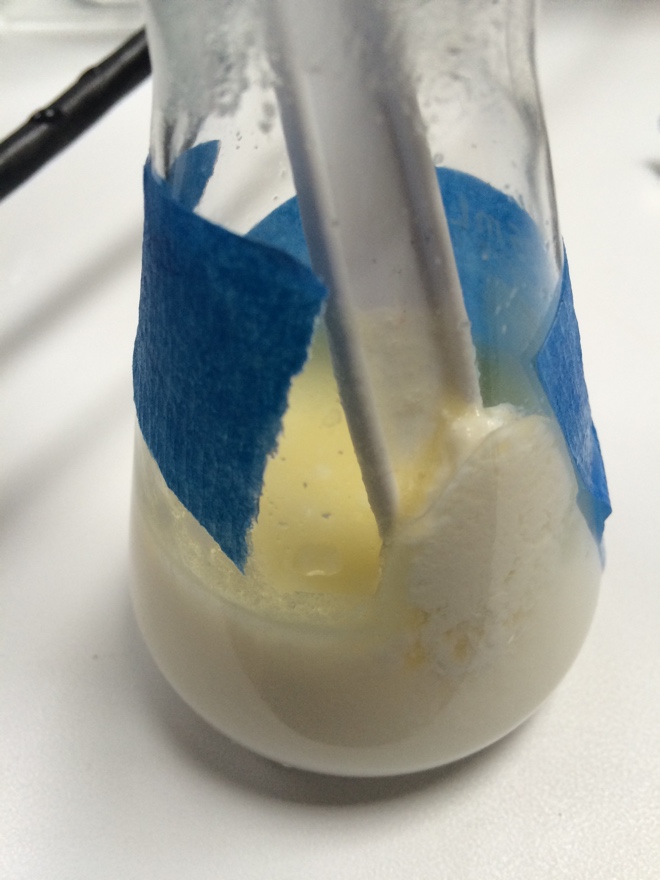 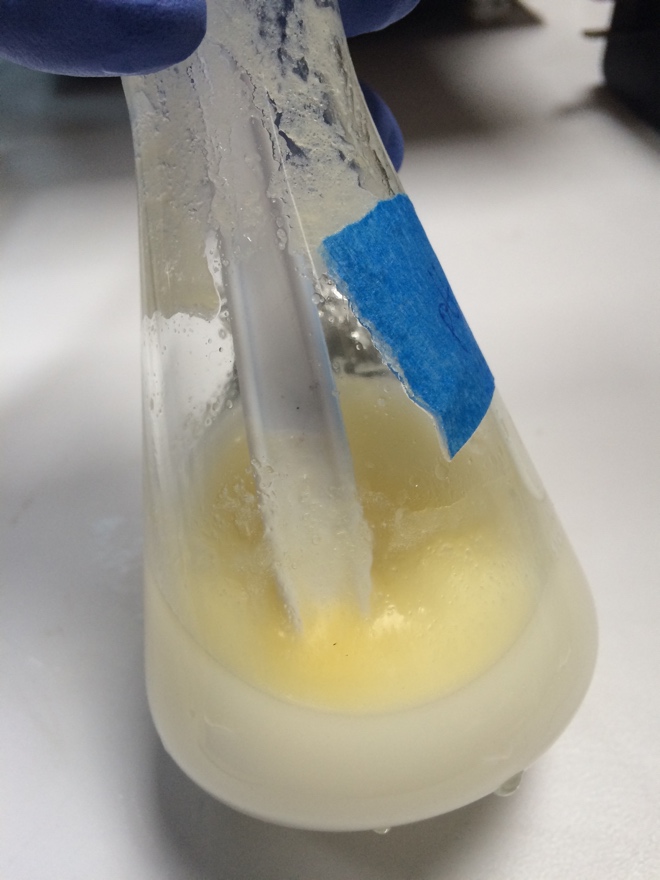 No evidence of curd formation was seen in the re-milk that only had its pH reduced.

A number of websites were surveyed, finding a range of concentrations for milk's primary components: protein, lactose and lipids. The results from this survey are found in the following table.

Salt composition was surveyed as well, the results and calculations are here:

Of the approximately 32.8g/L of protein found in milk, 27g/L is said to be casein. The BodyTech micellar casein powder lists in its nutritional composition a quantity of calcium that would be equivalent to about 18mM if the micellar casein were added to achieve a final protein concentration of 27g/L. As an oversight by the experimenter, the re-milk created here was made to a final casein concentration of 32.8g/L, neglecting that the reported composition of milk included various whey proteins and phosphoproteins (for forming stable triglyceride emulsions)

After all ingredients were added the pH of the mixture was found to be approximately 6.8 (using a swimming pool test kit which employed a phenol red indicator and a set of liquid standards. 7µL of phenol red indicator was added to 1 ml of the re-milk mixture.) pH was adjusted to 7.7 by adding two 1mL portions of a saturated (500mM) tri-sodium phosphate (TSP) solution. The tri sodium phosphate added brought the re-milk to a final [phospate] of approximately 2mM. This pHing was in an attempt to match the procedure from Experiment 2, where the pH was adjusted up to 7.5. When attempted production of cheese curds subsequently failed, it was noted that the commonly reported pH of milk is 6.5.

This mixture was placed in a fridge over night at approximately 1 degree C. Upon removing from the fridge, a solid layer of ghee was found at the top of the liquid, but no solid precipitate could be found. The mixture was reheated first in a warm water bath, then on the heated stir plate (speed = 1, temp = 85) until the temperature at the liquid surface was measured at approximately 35 C.

Sonication The re-heated re-milk mixture was shaken to attempt to distribute the oil layer, then approximately 125 mL of the re-milk was poured into a cut off (to ~ 3") dixie cup and placed in a the sonicator. Warm water was added to the sonicator bath to bring it to the same level as the re-milk in the dixie cup. The sonicator was then run for 32 minutes. The sonication did cause heating of the water, and at 24 minutes the water bath temperature was found to be 42 C; cool water was added to bring the temperature down to 34 C.

Initial mixture of ingredients produced a translucent yellowish solution with a layer of liquid ghee on top. After being left in the fridge overnight, no noticeable precipitation was seen in the bottom of the 500mL Erlenmeyer flask.

Sonication made a significant change in the re-milk's appearance, giving it a nice opaque white, much more milk-like quality. It is difficult to tell if the sonication had a significant lasting or permanent effect on the amount of liquid ghee in a stable emulsion ( oil persisting in solution with the re-milk/lactose, as opposed to in a non-polar oil layer on the top ) Comparing the photographs at 15 and 32 minutes, it appears the sonication at least transiently drove some of the oil layer into solution. Higher power, frequency variation, or longer duration of the sonication may improve these results.

The cheese making recipe used here attempts to replicate the instructions found a the ["Gouda, A Cheese from the North Country"] page of the cheesemaking.com website.

Approximately 125mL of re-milk was first warmed in a water bath to 31 degrees C. Once the temperature was reached, 50mg of mesophillic, c101 culture was added and allowed to incubate for 30 minutes. During incubation, temperature was found to vary between 30 and 36 degrees. The pH at the end of the incubation was measured and found to be 7.5.

Addition rennet was performed by first diluting 14µL of the double strength vegetable rennet to 280µL, then mixing it into the re-milk for 2 minutes. As to the instructions, curds should have formed by 40 minuts, however, at 40 minutes no noticeable curd formation or thickening of the re-milk could be detected. The pH was then adjusted down to about 6.8 with addition of 1:100 solution of HCl, and the culture and rennet were again added, following the above described procedure. After the 30 minute incubation and 40 minute rennet reaction, again no noticeable curd formation could be detected.

Testing of the culture and rennet

The culture and rennet was tested on real whole milk from Trader Joe's. In short, 125mL of milk was heated to 30 degrees C. The pH was tested and was found to be more acidic than the pH test kit's lowest range (see photo). 50mg of mesophilic culture was then added, allowed to absorb in for 2 minutes, then mixed into the warm milk. After 30 minutes, the pH was measured again, showing no apparent change. The vegetable rennet was then added and mixed in for 2 minutes. This mixture was then allowed to sit at 30 degrees C for 40 minutes. At then end of this time, curd was observed -- the milk had congealed to a consistency similar to Greek yogurt. This was taken as evidence that the rennet was still viable.

To determine if high pH and/or low [Calcium] were preventing curd formation, three 75mL aliquots of re-milk were treated with culture and rennet. One had the concentration of calcium increased by 10mM, the other had 625µL of 1:100 HCl added, and the final had the concentration of calcium increased by 10mM and the pH reduced by addition of 625µL 1:100 HCl. It was noted that some minor clotting was seen in the milk immediately after addition of the calcium to the CaCl + HCl and CaCl aliquots.

Re-milk was produced by slow heated mixing of casein powder, lactose, ghee and several salts followed by sonication. Culture and rennet were added to the re-milk, but no curds formed, thus production of cheese could not continue. Brief search revealed several sources which indicate the clotting process has some Ca2+ dependence. (http://www1.lsbu.ac.uk/water/enztech/proteases.html, http://www.tandfonline.com/doi/pdf/10.1080/00021369.1987.10868318). Although the casein powder is known to have some calcium, it seemed likely this calcium is tightly bound (by the casein, phosphate or in complex with casein as phosphate-casein nano clusters) making it unavailable to the rennet/chymosin.

Ultimately, curds were successfully formed in the re-milk by lowering pH to a range similar to that of milk and adding CaCl2 to raise the concentration of calcium by approximately 10mM.

Although this accords with addition of Ca2+ being critical to the production of curds from re-milk, several other possibilities remain. Some phosphate was added in production of the re-milk (raising the final phosphate concentration by approximately 2mM). It is possible this phosphate could have stripped away a small but possibly catalytically important amount of free calcium, which may have came along with the casein powder, as calcium and phosphate can tightly bind, forming apatite or brushite (depending on the pH) (Farrell 2006), making it unavailable as an enzymatic cofactor. Similarly, citrate was added to approximately 8mM; some sources also suggest this may bind calcium and fall out of solution.

As for the catalytic importance of Calcium, chymosin is described as an aspartic protease, and from a few searches of chymosin's reaction mechanism, no calcium ions were reported in chymosin's catalytic center. However, it is very possible Ca2+ plays important roles in either substrate positioning or other functions surrounding enzyme or casein conformation.

Make another batch of re-milk, adding appropriate quantities of CaCl2, add culture and rennet to form curds, then continue with the subsequent steps of the cheese making process.